Friesian horse: everything about the breed 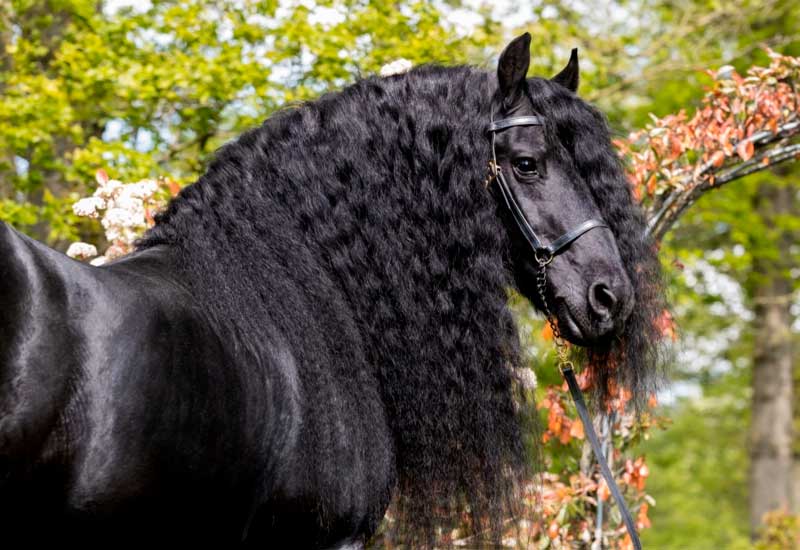 Nicknamed “The Black Pearl”, the Friesian horse can be recognised at a glance by its special characteristics. This rare horse with a zain coat originates from Friesland, a province in the Netherlands, where it got its name. It is a very old breed, used as a trotting horse, warhorse, and sport horse.

The Friesian is currently a saddle horse, but also a very popular draught horse. It is a prestigious equine that seduces riders enormously. Intelligence, kindness, a graceful physique, elegance, and strong charisma. Let’s take a closer look at everything about this equine breed.

The two types of Friesian

The Sport Friesian and the Baroque Friesian are the two existing types of Friesian. The Sport Friesian has a powerful hindquarter, his morphology is light, and his gaits are extended with a beautiful suppleness, loose and very brilliant. He has the morphology of a saddle horse. This horse has an excellent aptitude for competition and dressage. The Baroque Friesian, on the other hand, is heavier. Its physique is like that of a draught horse. However, it should be noted that this distinction is not made by the Dutch Friesian Studbook.

Physical characteristics of the Friesian horse

The head of the Friesian is powerful, long, and narrow. It has small, pointed and mobile ears and very expressive black eyes. The black pearl is also remarkable for its noble and expressive high head carriage. The neck of this horse is carried high with a swan neck and is curved. The body has broad, rather long, and sloping shoulders. A horse with a strong chest and well-developed withers, he has a broad, muscular croup and a slightly longer back. The legs are muscular, the joints broad and strong, and the dewlap is well developed. His mane is wavy, fine, and full-on his long mane. The tail is also full. It has a uniform zain black coat, without any white markings, especially in breeding males. The small white stars on the head may be an exception for the others. Finally, this impressive Dutch horse has a wide and elastic gait. With a more or less raised knee movement.

Characteristics of the Friesian horse

The Friesian is an affectionate animal with great intelligence. A quality horse with a lively and balanced mind, it is willing and learns very quickly. Of all horses, this breed of equine is very close to man; it is sensitive, gentle, and docile. Nevertheless, it has a sensitive and stubborn temperament.

The peculiarity of the Friesian

Despite its large muscles, the Friesian cannot take part in high endurance disciplines because it has small lungs. Because of its lack of breath, the Friesian is unfit for high-level competitions. As a result, it has a weak heart, which can be prone to cardiac arrest. In addition, it is not a good jumper because it has a small weakness in the hocks.

What is the price of the Friesian?

The price of the Friesian can vary according to many parameters, such as the characteristics of the animal, its capacities as amount, or the use envisaged for the horse. Just as an experienced horse costs more than a horse in its infancy. Indeed, the Friesian’s situation is special in terms of its rarity and degree of selection. This makes the market value of this horse breed all the more important, especially for the Netherlands, which holds ¾ of the international Friesian herd.

A half-year-old foal can be sold for C$4000 to 6000 if it has all its papers. On the other hand, a three-year-old full paper horse could only be bought for C$7500 to 10000. However, if you decide to buy a Friesian, you must also take into account the additional costs.