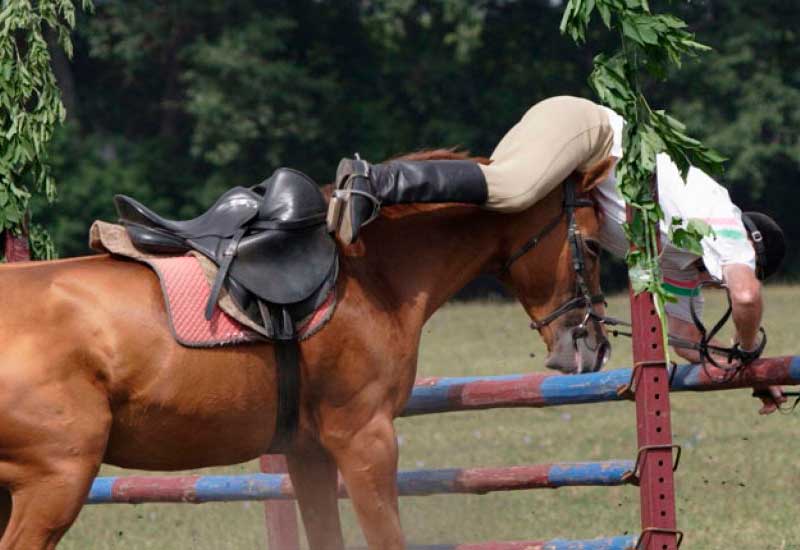 This fall is the one that makes you swallow all your teeth. You’re already all muddy and disgusting, and on top of that, you’ve swallowed half the sand in the quarry. Not very nice.

One of the falls on horseback that makes your friends laugh! Usually, you don’t get hurt too bad, and they’ll be laughing at you for the next 10 years because you’ve done a really weird position while falling.

With this technique, you will fall right on the bar. So you won’t really fall to the ground and you’ll still be clean. Nice catch, it’s creamy. And you won’t even be in pain.

Yes, this fall doesn’t happen often. We know that. You know it’s when your friend falls on an oxer and he goes between the bars. So he doesn’t hit the bars, he just falls on his back gently.

The only problem with this technique is that you can’t do it when there’s a basement full of water under the obstacle. Otherwise, you’ll get soaked and you’ll be in pain. So you’ll be in a real funk.

Suicide: one of the worst falls on horseback

This one is when your friend waits patiently for his death when he falls. Yes, he won’t do anything to avoid falling. No.

He knows that his case is already lost and that he’ll end up wallowing in the ground anyway. So he waits, slips, and closes his eyes so that it will pass more quickly. How brave he is.

One of the falls on horseback that all riders dread. It’s the one that won’t necessarily do your back any good, or your morale. And you will see all your mates stressing around you.

But if they see you smiling like an idiot after your fall, they will be reassured. And they’ll be thinking about the cake you’ll be bringing home next week.

One of the categories of falls on horseback that really compete with the artistic fall. And here it’s the same, it’s an artist’s work, but in full flight!

So you find yourself almost 2m50 above the sand, so you have time for a little freestyle show to impress the public!

It’s the same principle as bowling, the horse stops and you strike the bars. As a result, you lose your dignity and C$50 for the competition.

One of the most common horse falls. Yes, you know, when you make a beautiful sun over the bars, and you crash 3 meters away.

And it’s the same as the shortbread, you have sand in your mouth and you don’t look happy either. But you get used to it.

The dodger: one of the most coveted falls on horseback

Want to avoid a space-time glide after your pony crashes? Then throw yourself off before impact!

Yes, this type of fall relieves your soul and your back, but on the other hand, your buddies are laughing at you! But that’s okay, at least you may have avoided a hospital stay!

We hope you’ve enjoyed this little top on the categories of falls on horseback!